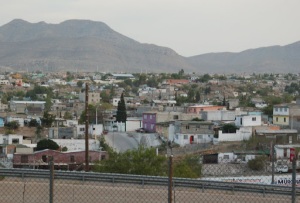 I sit on my front porch and look south. My gaze crosses a street, the interstate highway, a railroad line, at least four sets of border walls, and the Rio Grande river. It settles upon a neighborhood in Ciudad Juarez, Chihuahua, the Mexican border city that shares geography, politics and karma with El Paso, Texas.
The view does not lend itself to postcards. Survival, and not architectural sensibilities, drove the construction of the homes. They lie close together; there are no parks, there is very little green.
They do have their own Peter Piper Pizza place, and all sorts of small shops seem to do a lively business, with much coming and going of men and women and children.
I suppose that they are less than a quarter of a mile from my stoop, and I would argue that in some sense they are my neighbors. We can see each other; we could wave at each other.
A little further down the road, I notice several border patrol officers getting out of their vehicles.

They have drawn their weapons; they are approaching
some fellow who is walking along the highway. He has his hands in the air and looks frightened, as do the officers.
I look up and across the way and watch as a Mexican armored vehicle rattles down its highway, on the other
side of the border wall.
I wonder how many guns are running around in my (“our”) neighborhood.
I also notice the children on the other side of the border, for there are many, some walking hand-in-hand with their friends, others skipping down the sidewalk. I am thinking about them because next door to my apartment is an elementary school, and classes will begin soon. Our neighborhood will be filled with children, coming and going.

I am unsure what to think about this mix, armed men and small children. I see it all and I have a vague recollection of a Jewish mystic speaking on the ethics of seeing, something along the lines of being responsible for what it is that you notice as you wander through life.
I am thinking that I would like to close my eyes for a while, and then, perhaps magically, it would all sort itself out.
That trick never worked for me, even as a child, so I get up from my seat and go back inside the apartment, intent on finding that Jewish mystic’s line of argument, a little nervous about seeing where it might take me.