He is a tiny man, thin, with bad teeth. He has probably one hundred words that he knows in English. From what I can understand, he came from Vietnam at the end of the war, and has been living in Dallas for more than twenty-five years. At some point he decided to accept a ride with an acquaintance to “see the country.” The fellow who was driving decided to detour along the border. The thin fellow with bad teeth has no immigration papers, and so was arrested at a border checkpoint.

His name is Ut.

Ut was ordered into deportation proceedings, but since Vietnam is not receiving people the USA deports, he languished in detention for a long while. He was released, but has no where to go, so the Immigration Service, now known as ICE, brings him to a migrant shelter.

Sarah and I have been asked to explain the rules of the house to him. Sarah has the manner and the face of an angel; from the smile on his face, the poor man looks like he has arrived in heaven.

And Ut is one of the poorest people I have ever met. All he owns are the clothes on his back, a few papers that fit into a small bag, and, his pride and joy, a cheap wristwatch with an overlarge face that looks strange sitting on his thin wrist.

He smiles and says he understands. Actually, he writes that down on a piece of paper. He doesn’t speak the few English words he knows, he prints them out. (Click on the photo). 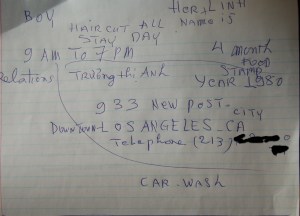 We tell him that he will be expected to help out with the chores, to which he agrees with a big smile. He writes on his paper “Hair cut,” and “car wash” using up four of his one hundred words, but also showing that he can be useful. He smiles some more. He writes “9am to 7pm” which I suppose means that he can work a ten hour day. I wonder for a while if he was paid overtime by those who enjoyed a hard working employee.

He also wrote “food stamps” and “four months.” Sarah and I have no idea what that means. Was he arrested for food stamp fraud? Was he offering to share four months of food stamps with us?

Then he indicates that he would like a cigarette. One of the Somalian guests walks him over to the small corner store. They return after a bit, and Ut borrows a book of matches from one of the Cuban guests. He lights up his cigarette with more joy than can be captured in a poem. I don’t smoke myself, but as I watch this man’s delight, it occurs to me that I might be tempted to try it.

He finishes his cigarette, and Sarah and I take him on a tour of the house.

We reach the top floor, and open the door to the roof. As Ut steps out on the roof, he gasps, for from up here the view is celestial–the skies open up, the mountains rise behind you and the lights of the city lie at your feet.

I watch him. I know that he has been in detention, holed up, alone, for a long time. Apparently he has no family; I am not sure how he will make friends, since he knows none of the languages that are spoken here.

Despite all of that, I realize that I am in the presence of one very happy individual. He continues to look up at the stars. He murmurs what must be the Vietnamese equivalent of “Wow.”

Sarah and I stand there as well, realizing that we were both blessed. We had been witnesses to unbridled joy, even if only brought on by a cigarette and a night sky.

We take him back downstairs. I read over his papers and realize that he is my age. We share the same number of years; I cannot guess how differently we have lived those years, or, more accurately, how those years have lived us.

I take my leave from the shelter, heading home. The Vietnamese man is sitting on the couch. He waves merrily at me. He says “Have a good night!” I will.