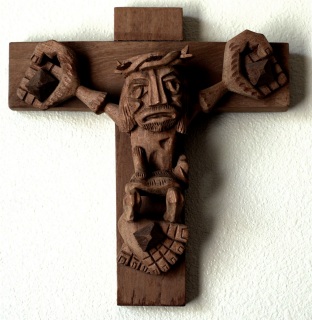 In the early morning light I pick up Barry Lopez’s novel “Resistance”, and turn to a new chapter. The first line reads “I watched my best efforts turn to coal.”  That is as far as I get, for the news this week is overwhelming, and the violence close at hand.
On this morning it does indeed seem that some of the best efforts in our world are turning to coal, the bright colors that mark life and goodness fading to dark grey and black under the continual onslaught of a violence inspired by diabolical greed.
Seventy-two Central and South American immigrants were found massacred in San Fernando, a small ranching town just a couple of hours drive from my Brownsville home.
According to the lone survivor, they were murdered by the Zetas, a group of criminals that feeds America’s drug habit, profits richly in human trafficking, and works tirelessly to organize evildoing in northeast Mexico.
Laurie Freeman reports in “State of Siege” (wilsoncenter.org/news/docs/State_of_Siege_WOLA.pdf) that the founding members of the Zetas were originally part of a Mexican special forces group, some of whom trained at Fort Benning and Fort Bragg. They were to be the stars in the fight against drug trafficking in Mexico. The Mexican Gulf drug cartel, though, soon bought off these well-trained soldiers.  In time, the Zetas, having already betrayed their nation, turned on their new sponsors and re-organized themselves into their own mafia.  The Zetas celebrate the terror that they breed, launching hand grenades in quiet city plazas and setting off car bombs to announce their presence. They also routinely kidnap, torture, and kill Central American immigrants who cross their territory as they head north.
Several hundred miles to the south, however, men and women continue to make the decision to migrate north. There is no work, and there is no way to feed the family. Today the newpapers reported a conversation with a man getting ready to cross into the Arizona desert. “I know that I am risking death; but in my home village, I am already living in a coffin. At least there is hope for something in the north.”
The migrants know of the kidnappings and torture that await them.  Women reportedly begin birth control months before they leave, knowing of the near inevitability of rape (http://borderlines.weebly.com/).  Desperation inspires in the men an unknown courage. I imagine that they must taste the ashes of their hope even as they take their first steps north.
The hopes of the seventy-two men and women who were killed in San Fernando have turned to coal. The killers did not bother to bury them; their faces were not even covered.
Because I remain a believer, I am anguished as I wonder, “Where is the light in this?”
I read other reports and discover that the migrants were killed, according to this witness, because they refused to join the Zetas and work for them as assassins.
“Kill or be killed,” they must have been told. And under a blazing August sun, so many miles from their loved ones, with their lives in their hands, literally, one by one they refuse this sordid offer of hope.
These men and women, powerless in every sense of the word, resisted.
They resisted even that most basic form of greed, the desire to live. They resisted despite the horrible clarity of the consequences of that resistance.
They said no, surely with quaking knees, and anguish in their souls.
They resisted.
I refuse to draw a lesson from this; I just note that only a few hours south of my home, just this past week,  seventy –two people stood strong.
That is something to consider.