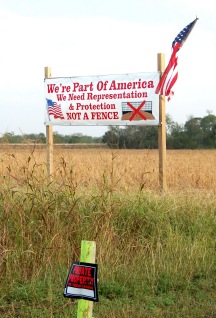 On Sunday afternoon, my dad calls me from his home in Alabama to tell me that the parish priest had mentioned me in his homily that morning.
As I was trying to decide if it were ever a good thing to be mentioned in someone’s homily, my dad said, “He was talking about that time you took him across the border into Mexico, and how, on the way back, the border patrol just asked him for his driver’s license, and that was it.”
The priest went on to assail the federal government, assuring the early morning Church goers that our southern border was not secure. “All I needed to get back into the country was a driver’s license, just a driver’s license!” he repeated.
This priest is a nice man, generous and hard-working to a fault. He has single-handedly helped build more homes and make life easier for more people than I could ever count.
He is one of the good people.
He is also blue-eyed and pale complected and has the confident posture of someone from the USA. The racial profile he would fit is “white, American.”

I was not at all surprised that he was able to get back into the USA on the basis of a driver’s license.  And I was not surprised that he was astounded by this vote of confidence in him by a border guard, for there is much nervousness in our country about the southern border.
The fact of the matter is that all hell is breaking loose on the other side of the border. Just in the past two weeks, hand grenades have been tossed at city hall and at hotels in Matamoros, a man was shot to death while jet-skiing on the Mexican side of Falcon Lake, and a bus was car-jacked just some miles south of the border.  The bus-jacking was particularly heart-wrenching, as one of the two people murdered was an exemplary student in a class that one of my friends teaches at the local university.  Born to hardworking parents in Dahlonega, Georgia, he was on a weekend trip to visit relatives.
And there is “spill over violence” as law enforcement likes to term it. During the same two weeks, two men were shot to death in their pickup truck on a Brownsville street. Machined-gunned to death, actually.
So, the border is not secure.
It is especially not a safe place for those of us who are brown-eyed, brown-complected, and poor.
Those who would fit the profile of being Hispanic, for example.
People fitting this profile are viewed with suspicion. They are asked for more than a driver’s license when stopped by the police, whether this be a casual traffic checkpoint or something more serious. One Mexican American friend of mine says that it is now “open season on the Mexicans” and when I see the border patrol trucks riding up and down the levee that borders the river, or the three border patrol men bicycling through my neighborhood on a Saturday morning, the impression is distinctly that of a hunt going on.
For a while I thought that perhaps I was exaggerating this whole security detail, but then I speak with Pablo, a fellow whose family turns out on Saturday mornings to do yard work in one of the neighborhoods in San Benito, a little town up the way. Pablo looks like a wreck. He no longer sleeps well. Pablo is terrified that someone doing the hunting going to catch him, and then he would be deported. “I have lived here for twelve years and I have my entire life invested here. And we will die if we get sent back to Mexico.”
Pablo was pulled over by the highway patrol some weeks ago, racing to get his eight year old to the hospital. The officer was satisfied with Pablo’s valid Mexican driver’s license and let him off with a warning. The officer did not call the border patrol, as often happens, and as so many people seem to want to happen. The officer was from around here, and I guess he felt some compassion for a man caught between this particular rock and this particular hard place.
And that is what the border seems to be these days, for folks like Pablo, a narrow place between a rock and a hard place.
The squeeze between those two unforgiving surfaces is only going to get tighter in the months to come. President Obama just signed into law a $600 million border enforcement package. Mexican President Calderon has also upped the ante in his war against the drug gangs.
As for Pablo, his Mexican driver’s license expires in January.
He will then have no documents at all, not even a driver’s license, which, if he were to have blue eyes and a pale complexion, might have been enough to get him out from between the rock—and this very hard place.