Two weeks ago, the Texas Legislature began its session in Austin, the state capitol. The state is in big trouble.
Thanks to a series of foolish tax cuts set in place a couple of years’ ago, as well as the generally poor national economy, the state now faces a $27 billion deficit.
As the session opened up, instead of focusing on this pending disaster, a dozen legislators spent an enormous amount of time and energy in filing over 60 bills seeking to punish immigrants.  Apart from insisting that local police do the federal government’s job of enforcing immigration law (without offering a penny in return for the costs that this would incur), the laws propose that teachers and principals investigate school children’s immigration status, and that the state tax any money being sent, for example, to a man’s hungry wife and children in Mexico.
The sheer number of the laws that were filed, along with the extraordinary nastiness of the language that followed their introduction is alarming. Texas politics will always have a few ducks in the crowd, but the quacking has reached a deafening pitch.
The normal reaction to politicians and government waving big sticks is to duck and cover. We have learned, rather well, on the whole, to be helpless in the face of undeclared wars and of macro-economic decisions.
This might seem to be particularly the case amongst the “working poor” (as if a poor person living in Texas has any other option than to be working). 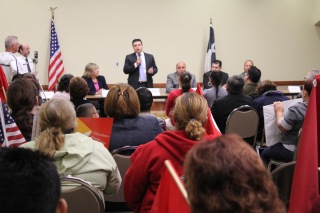 Last Saturday, however, more than a 100 folks braved a chilly, rainy morning to gather in a local chamber of commerce meeting room. They came to stand up and be counted, in a rousing protest of the anti-immigrant legislation being filed.
There were the usual players there, the good guardians of the commonweal that are the churches and the community-based organizations. But on this morning there were also some unusual voices joinging  in the protest.
“The Alamo Dollar Store denounces these laws!”
“El Gato Bakery formally protests the introduction of such legislation.”
“Papo’s Wrecker Service from Alton is against these laws.”
More than eighty small businesses joined in the protest against a series of laws that would cast a suspicion over all those who “seem” to be of “foreign extraction.”  They offered resolutions which were signed, sealed and delivered to our state legislators who came to meet  with us, their constituents.
This was a week to the day that, in a similar gathering in Tucson, several  people were shot while meeting with their government representative.
I found no fear in that room, on that morning. What I did discover was outrage at the idea that someone would dare to mess with Texas.
Our Texas.
As I was leaving the meeting, I saw an older fellow that I knew from other protests.  “How about them Cowboys?” I said to him, teasing him about the disaster of that football team.
“No te preocupes,” he said to me in Spanish, “¡Verémos el año que entra! Es el equipo nuestro–no se puede fallar!”
“That’s our team,” he had said, weirdly joining at least one part of his life to that of the East Texas legislator and long-time Cowboy fan who wants other Texans to fear this fellow.
The Spanish-speaking Cowboy fan said good bye to me, and walked out into the misty rain. He was smiling, his step confident. He had refused to follow the orders to “duck and cover.”
It was a good day.

Gaspar is a tall, handsome young man who grew up amongst a large family in a crowded rental home in a tough neighborhood near Brownsville.

In middle school, he decided that he really, really wanted to play the clarinet, and so he joined the band class.

On the first day of class, the teacher apologized, telling him that there weren’t enough instruments to go around and that he, being amongst the youngest students, would have to come back next year.

The gleam in Gaspar’s eye, as well as his disappointment, allowed the teacher a creative moment. He told Gaspar, “Look, I don’t have an instrument you can play, but you can mark out time for us by tapping on your desk.”

Gaspar eventually got to borrow a clarinet from the school.

Gaspar turned down the Julliard offer, opting instead to teach high school band.

“Just returning a favor,” was his take on a courageously unselfish career move.

Tradition considers Gaspar (“Caspar”, in English) to be the name of one of the three wise men who, searching the skies for a sign of Divine Intention, came upon the infant Jesus. Gaspar, the wise man, saw something in this child born into a crowded stable. In an unselfish gesture, Gaspar gave the newborn a gift of gold.

Tradition does not tell us what the poor family did with this gold. Perhaps they paid for a couple of nights in a local hotel. Perhaps they put the money away against troubled times.

I quietly hope that they invested in clarinets.