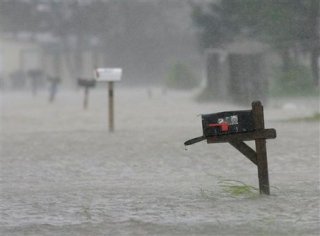 Dolly’s winds had pounded Cameron Count in the eastern part of the Valley, and had dumped up to sixteen inches of rain in Hidalgo County to the west.

The storm caused more than one billion dollars worth of damage, most of it due to the flooding.

Two and a half years later, the residents of the flood-damaged areas are still awaiting the help that the federal government had promised through FEMA. In the Valley, this would amount to about $106 million for housing and about $60 million to work on flood control.

In our area, these are extraordinarily large amounts of money that can do an untold lot of good.

They are monies, though, that are managed through a complicated process, one that is comprehensible only to the sorts of specialists that very large corporations can afford.

A contract was finally awarded to one such Fortune 500 company to “clean up the Hurricane Dolly mess.” These people are not from around here, and they are, in the end, a company. Their only reason for being is to clear as large a profit as possible for their shareholders. That is their business.

Our business, as members of this community, is to assure that those monies, in the end, help the poorest and the most vulnerable in our area. We have found in the past, that the best way to help the entire community is to lift up the poorest amongst us.

This would of course be the opposite of the trickledown theory, in which large sums of money are pumped into rich peoples’ businesses with the idea that some how they would do the “right thing,” and share their largesse.

Doing the right thing is never easy, and in this case, Valley groups felt that we would need to be involved in this project. We may never see this amount of money for flooding in our lifetimes.

Staking out a place at the table with a Fortune 500 Company is no easy task, but we were organized. Three  years’ ago our group of community-based organizations  had formed  the Rio Grande Valley Equal Voice Network. We reckon that we have nearly 20,000 people connected with our organizations, and  it is simply hard for politicians to ignore that.

To be sure that we were heard, we brought forty-five of our members to the public comments’ section of the local governments’ association meeting. One after another,  members walked up to a microphone that had been placed in front of twenty elected officials. One after another, they explained that their homes had been destroyed and their lives altered by the flooding from this storm—and that they wanted assurances that the resources would come to fix the drainage in their neighborhoods.

The testimony was succinct—and moving. Most of the folks had never given public testimony, and they walked warily up to the podium. Nearly to a person, after they had offered their words, they walked back to their seats, heads held high. 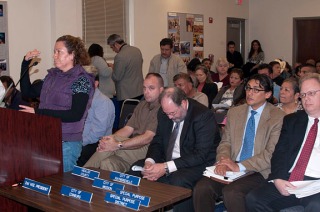 And those who gave their testimony, they
seemed. . .right.

(Flood photo thanks to mattslocum; community photos thanks to Jazmin Frances of ARISE).