Here in the south of Texas, we are familiar with any number of borders and boundaries, barriers and fences.  There is the river, and then there is the border wall. There is the line of border patrol agents, effectively forming a third barrier to those who would cross into the United States. There are barriers of language of course, but also of class—the gap between a wealthy Spanish speaker and a poor person who prefers Spanish is often so much greater than that between an English-only speaker and a Mexican immigrant.

These boundaries, by their nature, tend to be merciless, be they as natural as the river, which has killed many, many immigrants, or be they as artificial as the border wall, a construction created by a terrorized nation which chose to take money from schools and clinics and summer jobs’ programs in a 5 million dollar a mile effort to keep the world at bay. 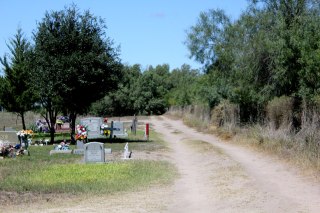 I would argue that the most effective of all of the boundaries we have along the border, however, is one we share with communities across the world. That boundary is the cemetery, that very controlled crossing point that in this land of border markers can have a special poignancy.

Although a place of heartbreak, the cemetery can also be a sanctuary for those who seek some solace in the midst of the awful and often confused ending of the life of a loved one.  The line of stones, the splashes of color, and, in this desert place, the oasis of shade offers, in my small bit of life experience, a good deal of balm to a troubled soul.

The Sacred Heart Cemetery in Falfurrias is one of the more special of those places. This past week, three of us drove up there to offer a visit.

Camilla instigated the trip. She is a French journalist who has invested the past three years of her life in trying to appreciate what happens when a  Honduran women decides to immigrate through Mexico to the United States. On one visit to Honduras, an association of families pleaded with her to make a trip to a cemetery in south Texas.  “If you could just take a picture of the spot where they have have buried our children, that would be a consolation.”

It was a long two hour drive from Brownsville. I expected that we would not be well received in Falfurrias—it is a small town in a poor county that has had to recover, identify and then bury hundreds of those who died while trying to get through the desert country in their effort to slip past the Border Patrol. The financial burden of burying these poor souls is not insignificant; the emotional toll would be incalculable.

But the reception by the county staff was extraordinary. The registry of deaths was brought out, and the staff sorted through the records with us. “So sad, so very sad,” they would say, time and again, as they flipped through one page after another. Cause of death: dehydration. Cause of death: exposure.

After some phone calls, a kindly fellow from the local funeral home offered to take us to the cemetery himself. “Otherwise, you would never find it,” he said.

And so it was that we arrived at this country cemetery, one like so many across the nation, with the exception that there were two sections with markers indicating the final resting place of some poor man or woman who had died a horrible death, alone and surely terrified, in the south Texas wilderness.

There was birdsong and the gentle sound of wind in the trees.

Camilla bent over and snapped several photographs of the markers.

I asked her how this made her feel. “You have come all of this way on behalf of  some families who trusted you with this sacred charge. What is it like to finally be here with them?”

She looked up once, and then down at the graves, and she said nothing. She just shook her head.

The breeze blew in a gust; the yellow plastic flowers marking the graves shuddered. And then they were still, as were we, as were we all.