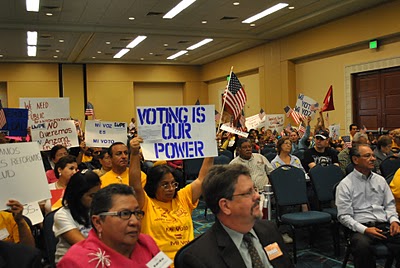 By ten o’clock in the morning this past Tuesday, May 1st, 350 people had quietly filed into the McAllen Convention Center. Some had small American flags, others had stickers that proclaimed “Mi Voto es Mi Voz” (my vote is my voice’), and some had two or three toddlers in tow.

They had come to participate in the Rio Grande Valley Equal Voice Network’s candidates’ forum, “un foro educativo”, an “educational forum” meant to help the candidates understand the issues that were most important to us.

A couple of dozen candidates soon took their seats, looking confident and attentive. The lone woman candidate, someone who had changed party affiliation just two weeks ago, sat on the edge of her seat, smiling brightly and waving her hand at the crowd. She had been a local TV news personage and looked ready to go live.
The questions, I felt, were good ones. They had been created from several groups that work on the issues that dramatically affect the lives of our families: immigration, housing, health care, jobs, and education.
A  young woman was in charge of asking the first question. She began with a preamble—the issue was so outrageous as to require some explanation. She noted that undocumented citizens could not obtain a Texas driver’s license, and that this was a huge problem—for everyone. “There is no public transportation here, so you really do have to drive a car to go to work or to school. But if a person can’t get a driver’s license, how do the rest of us know if they can even see (reminding us that a driver’s test requires a vision screen)? How do we know if they have studied the rules of the road? And if you are a responsible person and want to purchase car insurance, if  you don’t have a license it becomes so very expensive.” She continued for a bit more and then she looked up at the candidates and said, “So what is your plan to change that law?”  And remained at the podium, looking them in the eye as one by one they answered the question.
The morning was long but people stayed attentive. The questions went to the heart of the matter—our community simply wanted to be treated fairly, and we are not. We pay higher taxes than anyone else in the state, and yet our schools are horribly underfunded. We want our children to grow up as healthy and happy as anyone else’s, but health insurance is out of reach when they do get sick (half of Hidalgo County’s residents have no health insurance), and, if our children want to exercise and stay healthy—well, the schools lock down the playgrounds after hours, there are few parks, and no sidewalks. Our hardworking family members who do find work are paid half of what someone doing the very same job gets in Austin.
The questions were about justice, simple justice. What I found troubling is that most of the candidates could not correctly pronounce the word “injusticia,” while some of the others didn’t bother using the term—they seemed to think everything was hunky-dory in our neck of the woods.
In the evening, a second event was held, this one in Brownsville. There was less of a crowd, but it was a school night and there weren’t as many candidates on the slate. All the same, 75 more folks filed into their seats and listened as the candidates fielded the questions.
I found myself sitting next to an eighteen year old whom I have known since she was three years old. She was to graduate in a couple of weeks and was thrilled. “I want to become a registered nurse, although I would really like to do research and discover medicines that people need.” I asked her what she thought about the forum and she beamed, “I love to listen to this, but I get so mad when they don’t answer the question.”
A question that was not asked that night (because we didn’t yet know to ask it) was the candidates’ opinions on a decision by the University of Texas and Texas A&M systems to raise tuition rates. The universities seemingly felt pushed into a fiscal corner when Governor Perry refused to allow any state programs to access the “rainy day” fund—a pool of money that has now reached $ 9 billion.  Perry supporters claim that the fund is for emergencies (in the past the fund has been regularly tapped to meet budget needs—such as education)—and that educational shortfalls do not qualify as an emergency.
This decision may well leave my young friend’s dreams withering in the blazing sun of Texas politics. Her family cannot afford the tuition at the local university as it is, and were counting on student loans and grants—but these have been cut as well.
At the end of the evening, I gave her a hug and wished her well.
I went out into the warm evening, practicing, over again, the word “injusticia.”
I had no trouble with the pronunciation–nor the concept.