The taco place is popular, located in downtown McAllen. “Expensive, though,” said a friend. 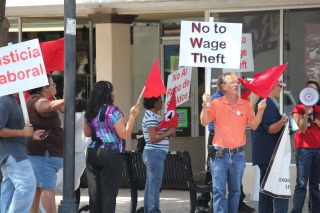 But no one bought lunch there last Thursday. About twenty of us gathered in front of the place at noon, having been asked by Fuerza, the Equal Voice Network’s workers’ center, to protest on behalf of some of the restaurant workers. Two of the cooks who  had been working  in the kitchen had recently complained to the Fuerza leaders that the owner was refusing to pay them, claiming that he “was short of cash.”
Hector, the charismatic Fuerza leader, had taken the workers’ complaints and then had gone through the protocol—making sure of the facts, getting names and dates, seeing if the Department of Labor would take the complaint, and then, called the owner, asking for restitution.
Normally the owner gives in, although rarely admitting guilt. This time, though, the fellow kept putting the workers off. Days of delay turned into weeks and then months. Hector felt that it was time to pressure the guy, to show some force.
Thus, our lunch time protest.
We had signs that said “No to wage theft!” and “Justice for Workers!” and a small megaphone for chants.
The restaurant owner refused to come out to talk. He locked the door, and placed a “Closed” sign in the window. Every now and then a potential customer would come up, pull on the locked door, then look at the protesters, and move on, his inconvenience written across his brow. 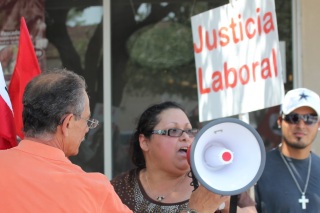 Juanita, one of the workers, walked with us in front of her former workplace.  She was so angry that tears welled up in her eyes when she explained how she had helped the owner set the restaurant up. “The menu, the recipes, I created those. I feel humiliated.”
As the noon hour came to a close, we gathered into a circle, and, speaking past the closed front door, assured the owner that we would be back, again and again, until he did right by his workers.
Two days later, and on the other side of the Rio Grande Valley, stands at a ballpark were filled with fans looking forward to a last baseball game of the summer. Two of my friends joined the crowd. They struck up a conversation with another spectator, a woman who turned out to be married to the home team’s pitcher.
As game time approached, my friends noticed that only the visiting team suited up. The pitcher’s wife, speaking on her cell phone, quietly said, “Our team is refusing to play. The owner won’t pay them their salaries. The checks that he wrote them bounced. So they won’t come out of the locker room.” Not a lot of money in any case, the wife explained—only about $600 a month. She, pregnant, and her husband, share an apartment with two other players.
After a while, the ballpark manager invited the kids to come down to the field to engage in a dance contest. And then, to a second dance contest. It was now forty-five minutes past starting time, and it was clear that there would be no game.
My friends got up, headed down to get their money back, and then set out for home.  They stopped by our house to share their excitement. “We saw a strike! Imagine that, we saw a strike on Labor Day weekend! What a great thing!”
The Labor Day weekend is bookended this year by the two major political parties’ campaigns. Both campaigns are making promises about having the answer to our nation’s economic woes, both campaigns claiming to understand “the big picture,” and that “big picture” seems to be all about powerful, untouchable greed

Locally, a couple of cooks and some minor league ball players are doing their best to get paid their very small wages. However small, they are their wages, and they are  wages that had been stolen.
While the greedy ones are indeed quite powerful, on this Labor Day weekend, I was pleased to be reminded that workers, in their own way, also have a good deal of power, of “fuerza.” What could happen if all that fuerza were harnessed and then unleashed? Now that would be a ball game worth watching.