Father Armand made it to his ninetieth birthday. He was dapper, fit, and passionately alive.  He

could have retired to any pleasant spot in the country, but he stayed in the Rio Grande Valley, embracing its heat and its challenges.

For years, each month, a group of us would eat lunch together.  After settling into the booth, he would order a Budweiser remarking each time that he had no office that he had to get off to after lunch (thus the beer) and that there was no place he would rather be, than here with friends (thus, again, the beer).

The other two of us did have offices to get back to, and so we would order water and iced tea, and then sit back and drink in the goodness of someone who had lived a long life well.

Invariably, Armand would offer his clear opinions on the sad moral state of the Dallas Cowboys, the New York Yankees, the Los Angeles Lakers, and, most recently, the Miami Heat. “Watching sports is therapeutic for me, you know?” he would say.

But those were games, and he knew them to be such. His real passion was the struggle for justice, and he had little patience for the folly of politics—and the foolishness of people who couldn’t be bothered with reading the signs of the times.

As a priest, he had offered many a blessing, amongst them, at least ten years’ worth of blessings that took the form of a campaign to teach children the power of the vote. As with the best blessings, he offered much more than words, as he pushed, cajoled, begged, played the clown and shared with the community his own sense of the urgent need to engage citizens in the forming of the future.

His blessing for these children was a constant invitation to share in his belief in the inevitability of a just society. Armand would not put aside his conviction that the best place to plant the seed of that hope was with children. 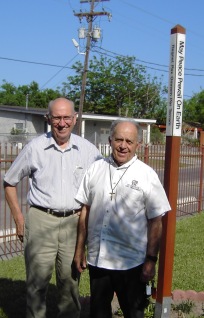 Fr. Armand went to sleep last night, still annoyed that the Spurs had lost to the Heat (I got an email laying that out to me). I am pretty sure that as he settled in for the night, his passions for justice and goodness had him reviewing the news of the day. He would not have been happy with the Senate’s plan to arm the border to the teeth even as they dithered with the futures of eleven million of our undocumented neighbors. He would not have been happy with the idea of yet another war in the Middle East.

I am also sure that he closed his eyes with the peaceful smile of someone who has fought the good fight—and knows that he has God on his side.

And, surely, God rested peacefully as well, knowing that God has Armand on God’s side.