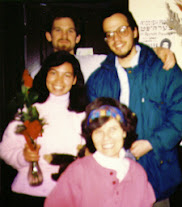 On Christmas Eve, 1991, I was preparing to celebrate Mass. I was at Casa Romero, a hospitality center for refugees set up by the Diocese of Brownsville in response to a massive number of Central Americans fleeing violence by heading north to the USA.

Because I had some time before we were supposed to start services, I wandered around the 300 or so folks who shivered in the cold and gathered in the space around the altar (Mass was obligatory—Casa Romero was run by a generous, but iron-fisted Spanish nun).

On the outer edges of the group, I came upon a young, thin girl surrounded by five or six older men. We spoke for a bit; she told me that she was heading out that night with these men, looking to cross through the Wild Horse Desert, a desolate place just north of Brownsville, in an effort to avoid the Border Patrol.

The men, hands stuffed into their pockets, scuffed the ground. They would not meet my eyes, and ignored my handshake.

I found the nun and told her that I was worried about the girl. The nun said to me, “You should be. Please take her to the rectory with you tonight. She is not safe here.”

The girl agreed to come and spend Christmas Eve with our religious community that night. She was sixteen years old, and she was from El Salvador. Her arms were covered with scars, about which she would only say, “They burned me with cigarettes.”

I gave her my room, for that night, and I took to the couch in the living room. The next morning, as I passed by my bedroom, I saw her kneeling on the floor, her scarred arms held straight out from her sides, her eyes closed, and her head upturned toward the heavens. She was back-lit by the sunlight streaming through the window.

It was Christmas Day, and I felt that God had sent me an angel disguised as skinny, scarred teenaged girl.

She stayed with our community for about two weeks, until some good immigration attorneys managed to get her a special travel permission, and then, into a center that worked with the victims of torture (The Center for Victims of Torture, http://www.cvt.org)

Some twenty years later, the focus of the news has shifted to the Rio Grande Valley, as, once again, tens of thousands of scared and scarred people are coming to the border, looking for someone to save their lives. The difference, this time, is that most of them are children.

The small-minded, and the narrow-hearted among us describe these children as “a nuisance”, “a threat”, even “a curse”. The media, and many in government refer to them as “a problem to be solved”.

But of course children are not a problem.

The problem is our broken immigration system. Our political leaders have avoided the hard discussions around immigration by insisting on mixing border security into any and every discussion about immigration.

And now we have a confounding problem—the border is, for all practical purposes, sealed and secured. The Obama administration spent more than $12 billion in 2013 on border security. There are hundreds of miles of an eighteen foot tall border wall, and thousands of Border Patrol agents. There are drones and sensors; the Texas Highway patrol has machine gun mounted boats patrolling the river.

But the majority of these children are not looking to sneak into the USA. They defy our expensive, exhaustive border security by simply walking up to Customs and Border Patrol Agents and asking to be arrested. In an act of desperation, the children throw themselves at our nation’s feet, and ask for some measure of compassion.

“What are we supposed to do, what do we need to be doing?” a group of Congressional Representatives asked community leaders this past Saturday morning, seeking some insight into the situation.

Wisdom teaches us that in moments of conflict, it is good to pause, take a breath, and revisit our ethical principles, to take some time to remember whom we are, so that our  decisions and actions are taken with integrity.

The Jewish/Christian Biblical tradition, one source of ethical principles, notes, in multiple places, the divine expectation that we are to honor, respect, and protect the widow, the orphan and the wanderer (Exodus 22: 21-24; Zechariah 7:9-10; Deuteronomy 10:18; Matthew 25: 31-40 and many more). The injunction is tied with a blessing—do this, and you will be at peace, you will remember who you are (“for you were once sojourners and wanderers yourselves”).

Seen under this light, then, the children on the border are not a curse. To the contrary, in a time of national divisiveness and confusion, they offer us the opportunity for a blessing—to be reminded, at heart, who we are.

The  many injunctions in the bible about caring for refugees are matched by an equal number of observations about the hard-heartedness of God’s people.

We are at a crossroads and only time will tell if the people of our nation will harden our hearts or accept this blessing.

For those of us living alongside this border, however, angels are streaming into our midst, fleeing for their lives, and asking us to share a bit of our lives with them.

This is, for us, a blessed time, an extraordinary opportunity.