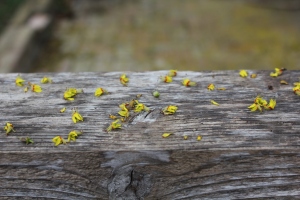 The grandmother had braved a crossing through Mexico, had endured the humiliation of arrest and detention by the US Border Patrol, and, for a moment, had basked in  the joy and relief of being welcomed into the church’s hospitality center.

The goodness of that moment was short-lived, as a Border Patrol agent came up to the grandmother and took her baby grandchild from her. “I am just doing my job,” explained the agent, “You are not her mother, and so she can’t go with you.” “But I am the only mother she has ever known,” protested the grandmother, who has cared for this baby since her birth.

The agent does her job. The grandmother screams, and cries, as does the baby girl.

The grandmother was just doing her job, when,  a few weeks before, she had taken the baby and fled her home in San Pedro Sula, Honduras. Someone is shot to death there, every day, and it has become a hellhole. So the grandmother headed north to the USA, seeking refuge and safety for the newborn, doing her job.

Jeh Johnson, the US Secretary of Homeland Security, is just doing his job, as he directs the agencies he commands to detain refugee families in private prisons and to deport them, as quickly as possible, whether the immigrants could qualify for asylum or not.

Federal district court judge Dolly M. Gee was just doing her job, when she found that Jeh Johnson’s jailing of the mothers and children to be illegal, and that the private prisons holding (and profiting off of these doubly abused folks) must be closed down.

Mr John Specia, the fellow in charge of the Texas’ Department of Family and Protective Services, has the job to “protect the unprotected” in the state of Texas. This is the fellow charged with being sure that places that detain children  are up to minimum standards. Last week, his department ignored their own guidelines and issued emergency rule 748.7, which, as Terri Burke of the ACLU of Texas explains, “specifically exempts these private prisons — referred to with a certain Orwellian flair as “family residential centers”— from having to comply with the minimum standards it requires of everyone else. In other words, with the stroke of a pen the DFPS can officially turn prisons into licensed child care facilities, though they do not meet the standards to which every other such facility is required to adhere.” Mr. Specia’s job, it seemed, has changed from protecting the unprotected (children fleeing death would be a very good example of that category) to protecting the very protected (the head of Homeland Security’s mission).

One of the responsibilities, or “jobs” of those of us who live alongside the southern border is to bear witness to all of this—the ripping apart of families in the specious name of national security, the horrific waste of public resources in wrong-headed efforts to “secure the border” as well as the depressing spectacle of huge fortunes being made making mincemeat out of poor folks’ lives.

The Christian testament, the Bible, has a chilling phrase in which the ever compassionate Jesus warns against those who would blaspheme against the Holy Spirit (Mark 3:28-30). This blasphemy is called an “eternal sin”, the one unforgivable sin. Jesus issues this condemnation to those seemingly righteous people who, claiming to be just “doing their jobs”  claimed that Jesus might indeed be capable of doing miracles, but it was because he was in cahoots with Satan. These authorities invoked their right to decide matters of law and tried to pervert  acts of goodness into an acts of evil.

In the same way that it is hard to understand how the loving kindness of Jesus of Nazareth could be linked to Satan, I have trouble imagining the callousness of those who create and invoke policies designed to stamp out the hope of folks who have little else in their lives. The cold-heartedness which must accompany the seizing of a baby from the arms of its grandmother, or the relabeling of a horrific prison as a “residential center” is terrifying–if not Satanic.

What wakens me in the middle of the night, however, is the thought of that baby separated from her family. What will become of her?

And whose job is it to heal the broken heart of the baby’s grandmother?

I do not mean this as a rhetorical question.