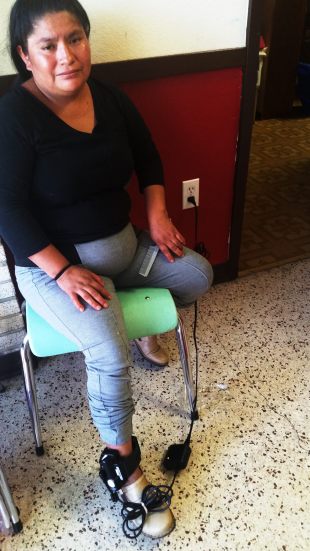 Last week I was helping clean up the small room that serves as a clinic at the Sacred Heart Respite Center in McAllen, Texas. Looking for a broom, I noticed a woman seated in a chair in the corner of the hallway, her ankle monitor plugged into a wall socket. She looked nervous and sad, and so I introduced myself. Our conversation was halting—she was from the Quiche region of Guatemala and Spanish was her second language, as she had grown up speaking her mother tongue.

I managed to ask her how often she had to charge the ankle device, and she looked at me, stricken, and said, “I really don’t know. They explained this part very fast, but the man told me that very bad things would happen if I didn’t keep it charged.”

After a moment she added, “I think that this (ankle device) is for bad people. I am not a bad person. I am an afraid person.”

We spoke for a while, longer, until her anguish seemed to overcome her, and she wanted to be left alone. I excused myself, leaving her attached to the device, and plugged into the wall, and short of breath.

I went outside, myself in need of a deep breath. I was anxious, not because I had an ankle monitor marking me as some sort of criminal, but because I did not have words of comfort for this human being who was clearly in need of consolation.

I did get my breath—a cool front had swept into the area during the afternoon and the air was sweet. I went back inside to find a broom, and get back to work. I noticed that the woman was intently studying her hands as she complied with the directives of Homeland Security to have her tracking device well-charged. As I passed her by, she smiled, wanly, and said, “Que tengas una buena noche.”

I thanked her, wondering at her civility, even in the midst of her own anguish.