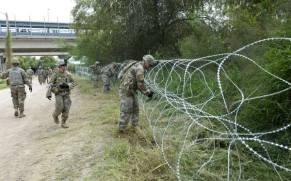 Near the Hidalgo Bridge

In an expensive campaign stunt, the current president of the United States militarized my border, even as he invited biblical curses upon our nation (“Cursed be he who subverts the rights of the stranger, the fatherless, and the widow.” Deut 27:19).

There is no caravan of people sitting on the other side of the river. The caravan coming through Mexico is a month away, and is composed of asylum-seeking fathers and mothers and their children.

The election, however, is in a couple of days.

The oldest and slimiest trick in the book is for a leader to declare war in order to garner votes.

Please vote on Tuesday. Bring your own army to the polls with you.

In March and April, when you start to write your check to the IRS, just remember that you will be helping to pay for the concertina wire that is a part of this political campaign ad.