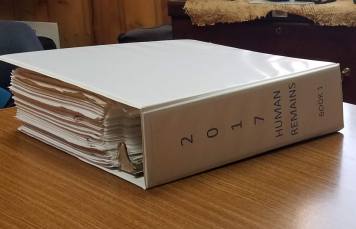 The large, white binder was lettered “2017, Human Remains, Book 1.” Inside were 521 photos of human cadavers, bodies found in Brooks County, a place about an hour’s drive north of McAllen, Texas.

The photos were horrific, post-death pictures of someone’s friend or son or mother who had tried to avoid arrest by the United States Border Patrol by going around the highway checkpoint. Some of them had walked for days, perhaps, before dying of hyperthermia or heat exhaustion or thirst or, I could imagine, desperate loneliness.

The sheriff, Benny Martinez, given his responsibilities, is a surprisingly affable man. He had agreed to a last-minute meeting with a group of immigration advocates. Shortly after we began the meeting, the sheriff willingly shared this very visible evidence of the consequences of US immigration enforcement activity. He noted, “For every person in that book, there are five more people that we did not find. That is a very sad thing.”

The sheriff grimaced and said, “At least that many. And we haven’t finished putting together the data for 2018. But too many people. Too many.”

As I paged through the book, briefly looking at the photo of a skeleton that was still partially clothed, or at the bloated, barefooted body of a woman dressed in jeans and tee-shirt, I was reminded of the curated photos in the Holocaust Museum of the bodies from the Nazi concentration camps and of the photos in the Human Rights’ Memorial in Santiago of the victims of Chile’s dirty wars. The scale is certainly different, as are the historical drivers of those events, but the cruel indifference to the consequences of national security policies is the same

The sheriff spoke a bit about the efforts he and the border patrol were collaborating on, including putting out GPS markers so that those who became desperate (and still had a working cell phone) could give rescuers a location. He talked about rescue beacons and other efforts, but the overall sense was that there was still going to be a lot of dying going on in this small county, and that his collection of Human Remains Books would continue to grow.

Our visit to this section of the dying fields that is part of the nation’s southwest border took place during the government’s longest shutdown. The attempt to pass a budget had foundered upon the president’s insistence on the need for more border wall funding. The Democrats, at this point, were holding fast to no funding for a border wall, but they were busy offering “technological alternatives” to a border wall. The national freakout over the best way to “secure our borders” is shaping our existence as a functioning national entity. This frankly boggles my mind. I am reminded of the poor fellow trying to dance a waltz to a band playing the two-step: it is wrong, unpardonably (disgracefully/shockingly/amazingly) wrong.

The discussion assumes that the border is unsecured, that someone from Guatemala or Mexico (or Ireland or England) could merrily wade the Rio Grande, call an Uber and end up a couple of hours later in Houston. The term “crisis” is repeated, over and again, until most of the country believes that there is a flood of humanity overrunning south Texas, and that we do indeed need to “do something” about our southern border.

The United States is indeed doing something about the southern border, but it is not something that my mother would be proud of. Instead of working hard to create a comprehensive, humane, 21st century overhaul of our immigration policy, our national leadership has doubled down on a policy of deterrence. This presumes that if we are cruel enough, no one will want to be come here; if enough people die trying to cross into the United States, then maybe people will think twice about coming; if they do manage to cross the river, then we will hunt them down, forcing them off the highway and into the desert, where they may well lose their way, run out of water, and die an excruciating and lonely death.

Two Thanksgivings ago, as our family was gathering for a meal in Brownsville, I received a call from a lawyer who works with refugees. She had gotten a plea from help from a family in California, whose uncle had crossed the river, was wandering in the brush somewhere outside of a border town and was feared to be in dangerous condition. The fellow had a cell phone that worked, and managed to send his family his GPS location. The lawyer wondered if I could rush the man some water and some food, so that he would not die.

My lovely son-in-law and I hurriedly packed a bag and made our way to where the man was supposed to be waiting for us. We did not find him. Concerned, we left the bag out in the open, snapped a picture and “pinned” the location, sending all of that back to the California family. Over a year later, in the midst of the government shutdown and the ranting about border security, I received a note from the lawyer. The man had, in fact, finally made it to his family. He was safe, and wanted to express his gratitude, as did his family.

For my part, I was happy to know that  his photo would not be found in Sheriff Martinez’s Book of Human Remains.