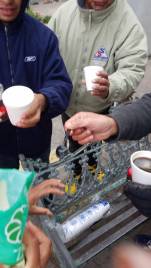 Two weeks ago, on a Sunday afternoon, as the nation was being reminded over and over again about the “national emergency” on our southern border, I decided to face my country’s fears head on. I met up with some friends in Brownsville. We loaded up a couple of small wagons with some cases of cans of black beans and condensed chicken soup, tossed in several bags of McDonald’s hamburgers and walked across the national emergencied international border between Mexico and the United States into Matamoros.

Our group was just one very small part of an enormous, region-wide effort to offer aid and comfort to refugees coming to our region. Today’s task was to bring lunch to the more than one hundred souls who had been waiting for weeks to enter the USA “the right way.”

Our first challenge was the Mexican customs officer, who gave our groceries a close review. “We don’t want you giving those people any thing that is expired,” the officer said, with a smile.

We then passed two Mexican Marines, “Good afternoon! We have come to visit the immigrants!” we greeted them, and they, too, smiled, and waved us along.

We pulled the wagons up a small hill into an area just off the entrance to the international bridge. People got from where they were sitting, and came down to meet us, eyeing the food, mostly, but also shyly offering their hellos. 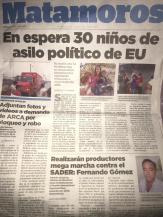 There were 126 refugees there on that Sunday afternoon, most of them from Central America, although there were some people from Cuba and Venezuela as well. The children were all Central Americans, tired looking, but each with their special smile. They were all stuck in a hard place, bullied by a new policy put in place by the US government which, illegally, stopped allowing asylum applicants efficient, safe entry into the country. Some, with their children, had been living on the streets for nearly two months.

As we set up our small food service, the refugees formed a line for lunch, the kids being served first. They took their cheeseburgers over to a wall where they sat and had their happy meals, seeming, to me at least, a little more excited about this gift than the Clemson Football team at the White House a couple of weeks before. We visited for a time, then picked up the trash and prepared to head back into the national emergency that is Brownsville.

I tried hard to find someone that we should be afraid of, but about the closest I could get was a man named Rafael, who seemed threatening, but I think that was because he was very tall and really anxious. But when we spoke, he leaned over, getting down to my size, and then he told me that he was terribly worried about his eight year old son, who seemed to have a really bad tooth infection. No terror there, just a sensitive dad hating to see his son in pain.

Our group returned to Brownsville, carting our empty wagons past bored Customs and Border Patrol officers and the yards and yards of concertina wire, the refugees and their hopes now on the other side of the Rio Grande from us. If anyone was experiencing an emergency, it would be those folks.

As for me, on that visit, I didn’t meet a single person whom I wouldn’t have  minded having as a next door neighbor, someone to visit with over the fence, someone to borrow a couple of eggs from, someone with whom to share worries about the kids.

One thought on “Sheltering in Place”