(Published by the ACLU of Texas: https://www.aclutx.org/en/news/living-between-rock-and-hard-place)

I have walked across the Brownsville international bridge, the structure that connects my hometown with Matamoros, Mexico, hundreds of times over the years. As a longtime borderland resident, crossing back and forth for work, family, or business is part of regular life.

But on one morning late last year, I crossed the bridge along with one of my colleagues for a much more serious reason.

Both of us had received worrisome text messages from friends in Matamoros reporting that some 300 asylum seekers had staged a sit-in on the Gateway International Bridge. Our friends knew that the ACLU of Texas was advocating and litigating on behalf of these families, and they thought that we might be worried about them.

The idea of hundreds of vulnerable asylum seekers in a face-off with militarized border guards did indeed make us nervous. After all, the militarization of our community in Brownsville had reached extremes I never could have imagined when I arrived here back in 1989. 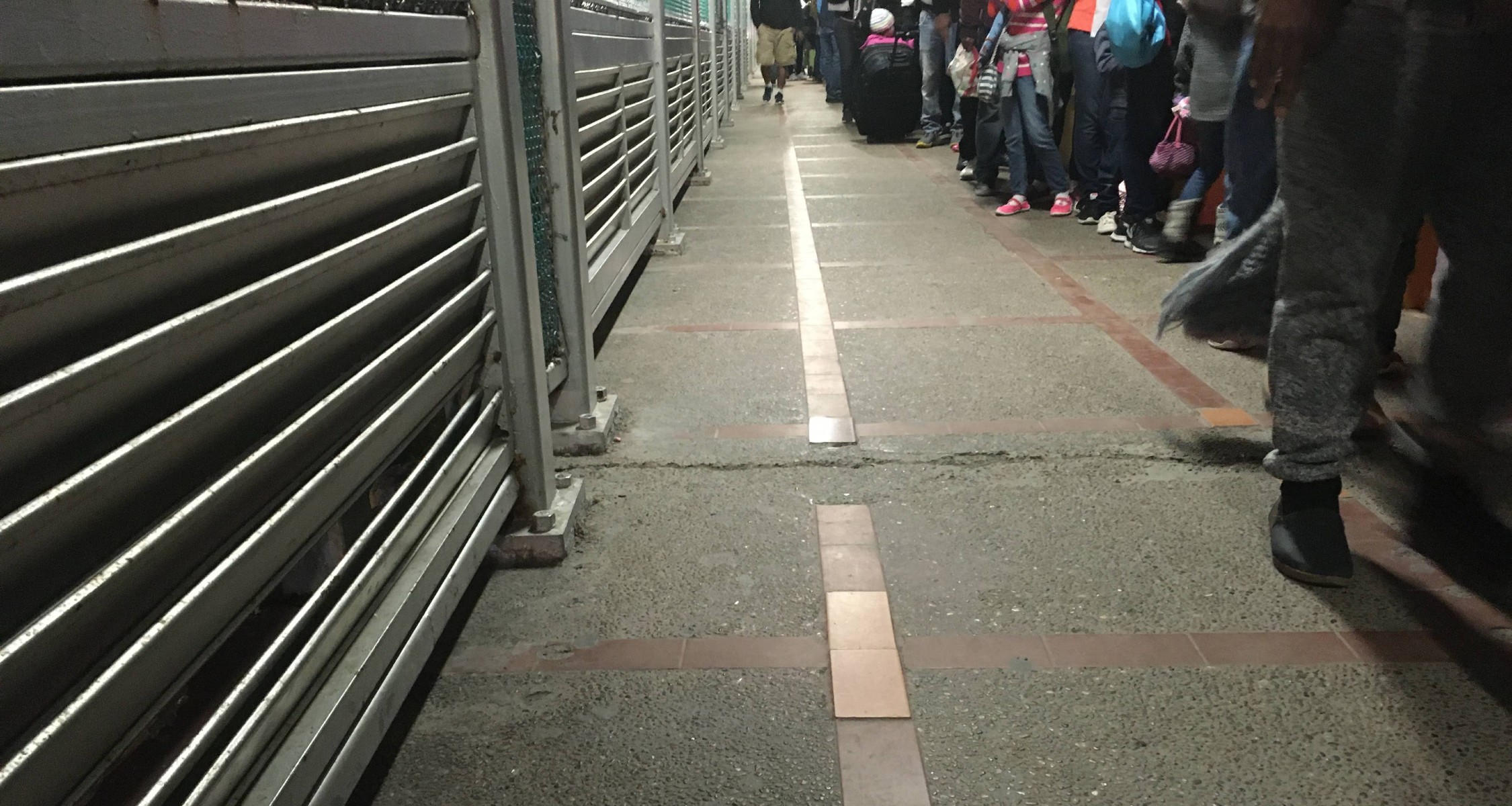 Hundreds of asylum seekers and migrants lined up early in the morning at the Brownsville-Matamoros port of entry, nervously waiting for their court dates.

In three decades, the Rio Grande Valley had gone from being a lovely, quiet place on the border by the sea, to an occupied zone. Three thousand border patrol agents, hundreds of state troopers, and military troops are now patrolling our streets and the banks of the river. The miles of concertina wire sitting atop the border wall that runs right through the heart of Brownsville adds a particularly bitter punctuation to the sense that we are a community under siege.

Yet we aren’t under siege and never have been. “Securing the border” is the official reason for all of the armed federal and state troops in our midst. What is happening is that there are families who are fleeing for their lives at our doorstep. And in Brownsville, residents actually open their hearts to these families, offering them food and shelter.

Indeed, if many Rio Grande Valley residents are feeling unsafe, it is more likely because of the enormous number of uniformed agents running around with guns on their belts. Some of the most horrific crimes in our otherwise peaceful region have been committed by federal agents: In 2014, near Mission, Texas, a border patrol officer sexually assaulted and attempted to murder three young women — two of them 14-year-olds. And just this past year, in Laredo, another Border Patrol agent is on trial for serial murder. 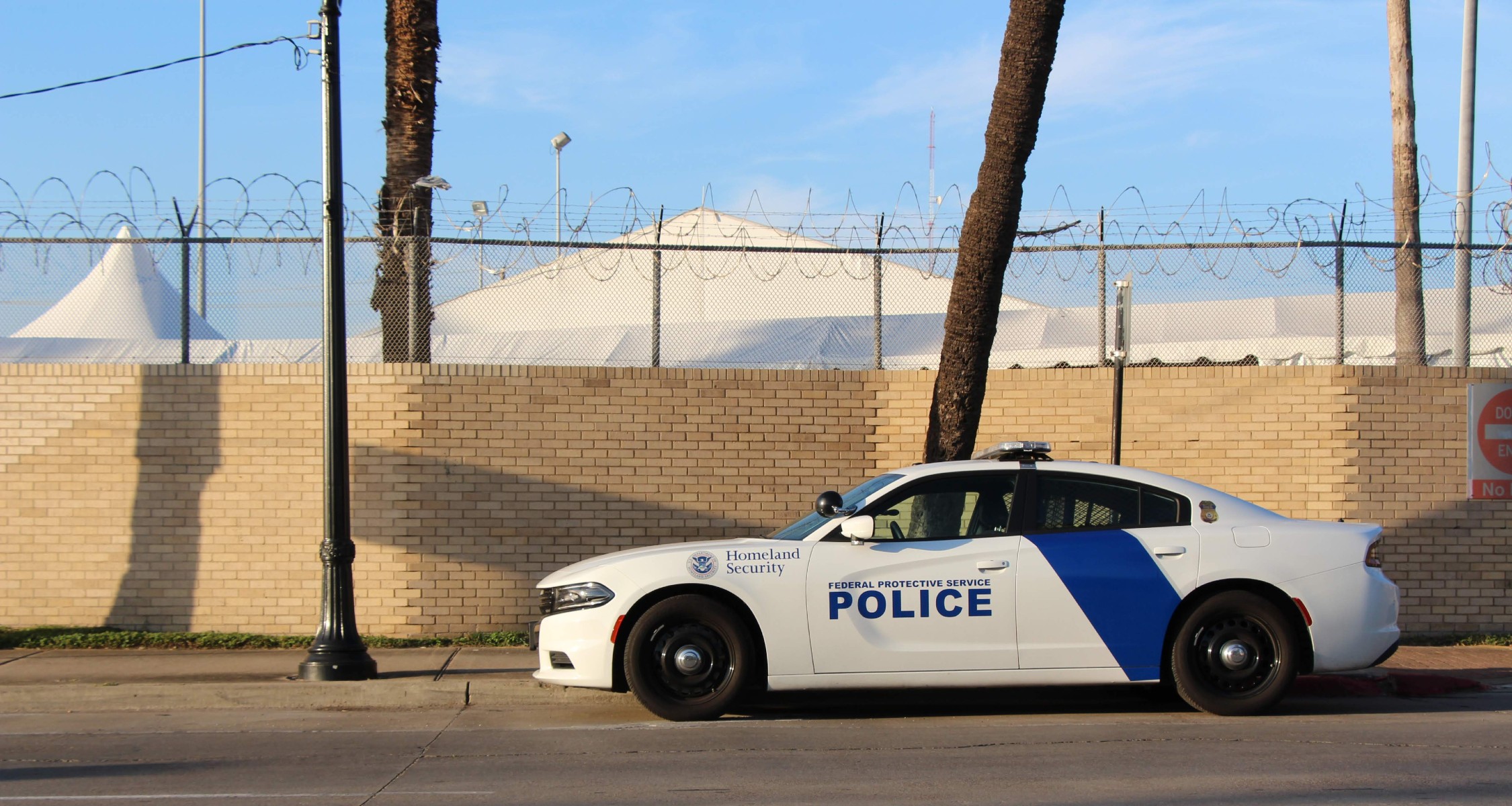 A Department of Homeland Security vehicle parked outside a restricted area near the port of entry in downtown Brownsville, TX.

Aside from those sobering events, just the fact that there are so many fingers on so many triggers signals that violent events could escalate very quickly at the drop of a dime. And it wouldn’t be federal employees that would suffer; people from the community and those seeking refuge would be the casualties.

On that cold morning, the thought of the asylum-seeking families on the international bridge facing off against Customs and Border Protection agents suited out in their riot gear quickened our steps as we made our way toward the bridge.

Although concerned, I was not surprised by the action of the asylum seekers. For weeks, more than fifteen hundred people had been living in small camping tents at the entrance to the bridge. The conditions are horrific. There are only six portable toilets available to the families; there is no public safety. 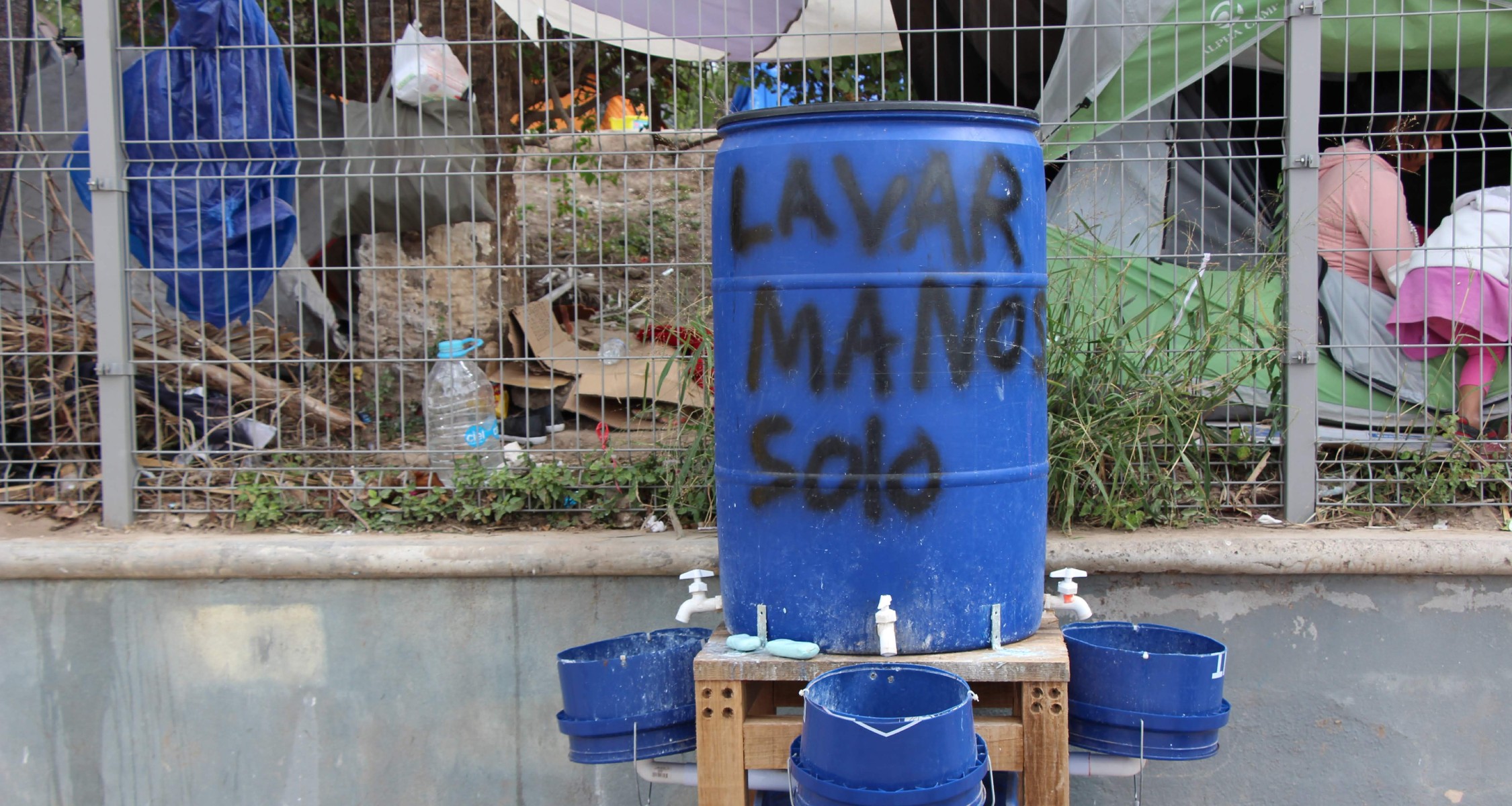 One of the few hand washing stations, surrounded by litter, in the asylum encampment that has emerged in Matamoros, Mexico, near the U.S. port of entry.

Rape had become commonplace, with reports that the “morning after” pill is a common request from the women in the camp. As there are only four showers available for the more than 1,000 souls, people had taken to bathing in the Rio Grande. This river, while nearby, carries raw sewage from dozens of cities that line it. The river regularly features rotting carcasses of animals that die by its murky banks.

Many of these asylum seekers had been in Matamoros for months. The federal government had placed them in the Migrant Protection Protocols program (MPP), a policy that meant that the asylum seekers would have to endure horrendous conditions in Mexico while awaiting their asylum hearings.

Finally, the frustration of the hundreds of people at the port of entry in Matamoros had reached a tipping point. And so, in the middle of the night, three hundred of these suffering souls decided to walk to the top of the bridge, peacefully making the only case that they had to make — that they were human beings and deserving of being treated as such. 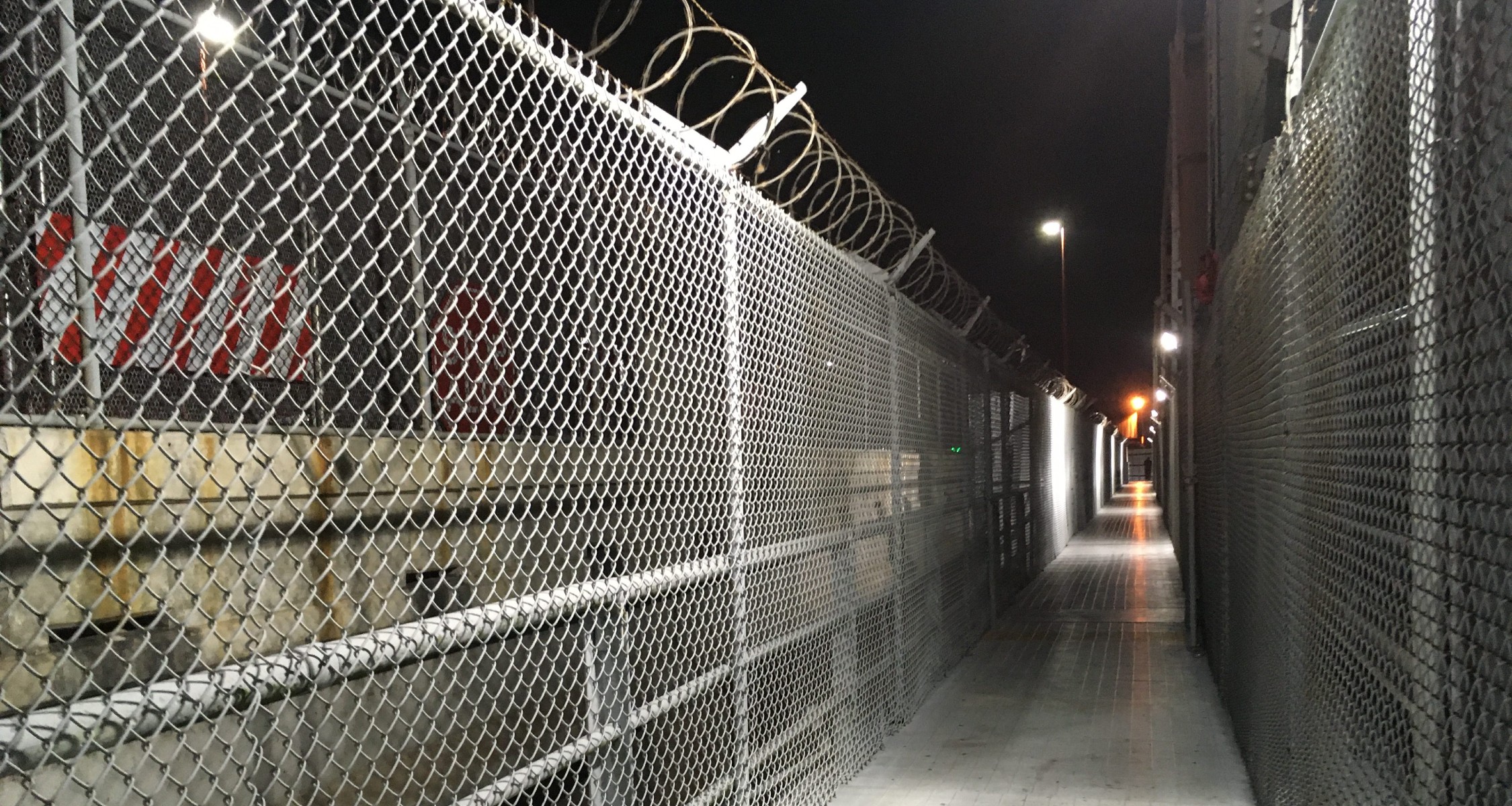 The pedestrian walkway on the old bridge that connects Brownsville to Matamoros, Mexico.

While families congregated in the early hours, CBP agents quickly sealed the bridge, dragging a high fence with concertina wire across the road and shutting the gates on the sidewalk. The asylum seekers, upon reaching the barriers, chose to lie down on the roadway. Some of them had thought to bring mats, laying them out for seating. Others simply took their place on the public roadway. There was never an attempt to rush the barriers or otherwise gain forced entry into the U.S. — simply a peaceful demonstration of their humanity.

Despite the calm gathering, the CBP agents called in reinforcements, and soon a dozen agents, dressed in anti-riot gear were facing off against the families. A drone hovered overhead, and an officer made a show of photographing the protesters.

Then, for the next 14 hours, the groups simply faced each other, divided by a fence, and politics. One group was committed to nonviolence; the other group appeared ready to be quite violent. In an irony of life in the borderlands, many of the CBP agents and the asylum seekers shared the same last names, the same language, and, in many cases, the same faith.

As the day wound to a close, the asylum seekers quietly left the bridge, moving back to the hovels that has been their home. Suddenly, in an unnecessary and provocative gesture, CBP agents blasted off four rounds of smoke bombs near the crossing, the explosions rattling windows and setting off car alarms. We were told the agents were just “taking advantage of the moment” to practice.

These last blasts might have been meant as a sign of power, but I saw them as a mark of our national impotence. Sure, we can march soldiers to a line and spend an enormous amount of our precious resources repelling a nonexistent threat. Yet we aren’t big enough to offer people fleeing for their lives a chance to tell their story, nor an opportunity for us to be the big people we say that we are. 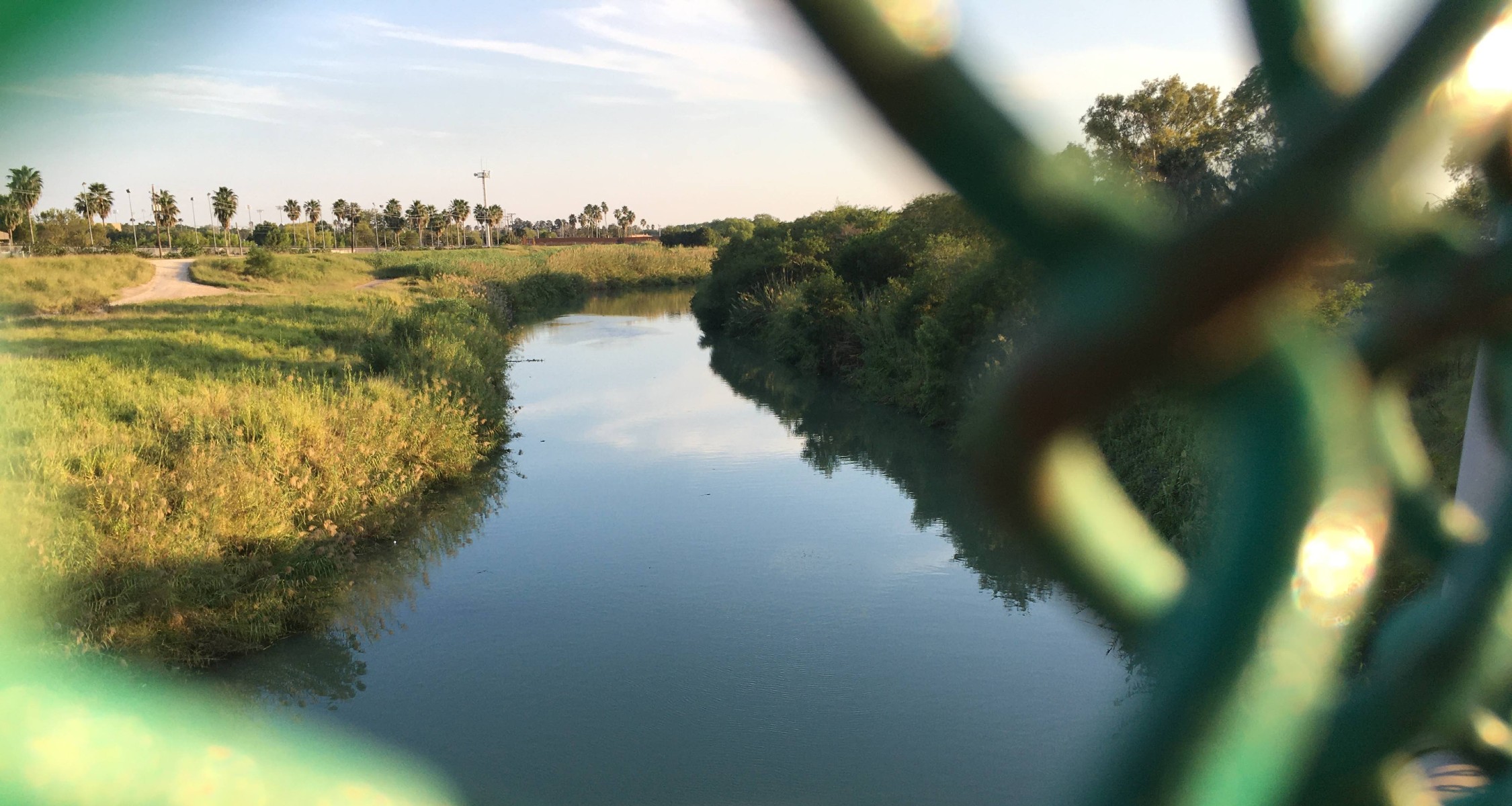 The Rio Grande Valley is surrounded by fences, like this one at the port of entry in Brownsville.

Meanwhile, the asylum seekers who peacefully demonstrated throughout the day, displayed admirable public courage. This, despite being subject to a place where they are damned if they flee the violence of their home country and damned if they don’t manage to get to a safe place with their family. The absolute weakest, most vulnerable people in our bi-national community stood up face-to-face with the most powerful force in our region.

And their message was simple: We are here. We are not leaving. We are not afraid. An incredible message to hear in this very tight spot in the Rio Grande Valley of Texas, where we find ourselves living between a rock and a hard place.

Voices of the Rio Grande Valley: How Extremist Federal Policies Continue to Threaten Texas’ Borderlands. Over the next several weeks, the ACLU of Texas, in collaboration with staff and community members based in the Rio Grande Valley (RGV), will be sharing a series of essays, photos, and videos that demonstrate the region’s ongoing struggle to ward off intrusion of federal policies on everyday life. While many of these policies are not new to the RGV, they have been ramped up under the Trump administration, which has used the borderlands, its people, and its resources as pawns in a political game. But the people of the Rio Grande Valley are not staying silent. Join us as we explore the rich history, culture, and environment of this region in southeast Texas, and how its residents are fighting back to preserve their homes and way of life.