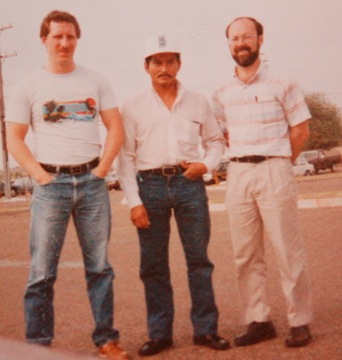 I remember him at odd times, a small, quiet man whose scars on his thumbs spoke far more about his suffering than his own words could.

His name was Francisco, and I had met him back in 1988, when I had first come to the Rio Grande Valley in south Texas. Francisco was from Guatemala, and had shown up at our parish door asking for something to eat and a place to stay while he arranged for a bus to take him to relatives who lived in New York.

Francisco had been a catechist in his small village. A catechist is someone trained by the church to offer basic religious instruction and lead the community in prayer. His acceptance of this responsibility on behalf of his community was unfortunate.

In 1982, the Guatemalan military had put up an army garrison in Francisco’s village. Soon after arriving, the new post commander sent soldiers to bring Francisco and his wife and children in for interrogation. Francisco had brought his bible with him, “In case he wanted to pray with me,” he told me. Francisco said that upon seeing the bible, the officer told him, “You people are communists.”

The officer ordered his soldiers to bind each of the family members’ thumbs together with copper wire. The family was then marched to the edge of a ravine just outside of town.

Francisco, horrified, his thumbs bound behind his back, leapt off the cliff, survived the fall, and escaped the soldiers. After years of hiding from the army, Francisco made his way out of Guatemala, across Mexico and into the United States, where he applied for asylum.

I do not know if Francisco ever received asylum. I met many people during that time in the late 1980’s and early 1990’s who did not. (Robert S. Kahn’s Other People’s Blood details how in the Rio Grande Valley the Immigration and Naturalization Service and other federal immigration enforcement agencies so corrupted the process that the granting of an asylum claim was rare). All the same, occasionally, people in dire need received asylum.

The evil that was visited upon Francisco continues, unabated, across the world, and its victims seek flight from its scourge. Over the past year, some made it to the Mexican side of our southern border, where they have waited, with an exhausted hope, for relief. The Trump administration has battered that hope with one punitive action after another—separating children from their parents, holding people in barbaric conditions in border patrol detention, forcing people to wait in the extraordinarily dangerous conditions in Mexico, and a series of attacks on the asylum process itself.

These actions are in contravention of our own law and international conventions, rules of good governance designed to create safe spaces for those caught in government-grade barbarity. All the same, the administration is proposing a yet another new rule, one that would practically bring an end to America’s offer of asylum. The proposal is exhaustive in its wickedness, narrowing acceptable categories for seeking asylum to a near null set.

The rule is a proposal and so open for public comment. If you and your community would like to offer a public comment against this proposal, you can go to the website dedicated for receiving those comments: https://www.regulations.gov/document?D=EOIR-2020-0003-0001.

Sarah Cruz of Texas Impact did all of us a great favor by writing a piece offering context and background for the rule:  https://texasimpact.org/2020/06/new-proposed-rule-will-end-asylum/

There are other Franciscos waiting at our southern border. They have come “trusting in Americans” as many of them have told me, time and again.

As far as Francisco goes, I would like to believe that our country honored his trust in us. I would like to think that he is, therefore, living as a free man in a small town somewhere in the US, his heart and his thumbs still scarred by the evil of that long-ago afternoon, but in a safe place now, from which he might honor the memory of his family.