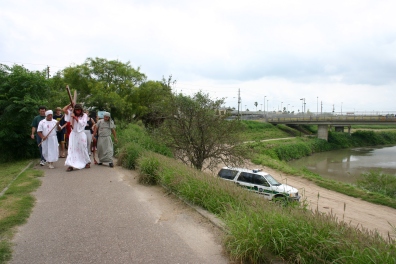 Last week I met with a writer who is thinking about moving to the area. He had been out and about, meeting people, visiting different places, getting a feel for the Rio Grande Valley. We met in a downtown Brownsville café.

This café is only a few blocks from the border wall, from the Rio Grande, and from Mexico. It is a much-needed space for art, and encourages young and old musicians alike to share their talent on the small stage. The hospitality of the owners of the cafe makes it a great place for conversation.

Although there is no altar or priest, I think that it is quite possibly the best church I have ever been in.

The writer and I had just settled into the back and forth of getting to know someone, when one of the owners sidled up to the table, introduced himself to the writer, and took a seat.

The conversation switched back and forth from English to Spanish, from national politics to the wonders of life in Mexico City.

We spoke about the challenges of living along the Texas/Mexico border, with the obscene violence of the drug cartels in Matamoros, Rio Bravo and Reynosa pressing us in from one side, and the institutionalized and complicated violence of immigration politics in Texas bearing down from the other.

At one point, the owner leaned forward and said,

“This is what it is like. My father is 92 years old. He is here on a tourist visa, so he can cross back and forth from Mexico. And he needs to go to Mexico, as he goes to the doctor, and buys his medicines over there. There is no way he could afford to do that in Brownsville. But here’s the thing—I am here on the sort of visa that does not allow me to go back to Mexico. And so my dad goes over there on his own. But what happens if he loses his way? What happens if he forgets his papers?”

Because this is still a small town, it turns out that I know one of the officers at the bridge, and write a name and a phone number down on a small piece of paper. I tell the owner, “Give this to your dad; should something happen, he needs to ask for the officer.”

Immigration policy these days sometimes seems to come down to notes handwritten on small pieces of paper, and tucked away against a very bad day.

We move onto other stories—one about a family and a son who had been kidnapped by a drug cartel, and tortured and beaten. His mother finally quit taking phone calls from the gang at about 1am. When she awoke the next morning, she had 38 unanswered calls from the same number. Calls went out asking for advice; no one, no one seemed to have any good ideas. The whole episode is a diabolical extension of her son’s torture.

I turned to the writer and said, “You can see how complicated this becomes. We certainly worry about her son, but I have to ask myself—where does SHE go? Where does she take her anxiety? How does she not get sick?”

We talked about the Syrian refugees who were supposedly coming north to the Valley. We fretted over the Central American children who were being “rocket-docked” out of the United States, right back to the narco-violence that would consume them alive. We shared  embarrassment that the US refused to even discuss saving the lives of Mexican children, kids facing the very same violence as those from Honduras or El Salvador.

The writer looked up from his notes and asked, but why then live here?

And the owner of the cafe, in the end a philosopher and a poet, said, “But why not? What we are living here is an event of historical transcendence. In fifty years, in one hundred years, people will be discussing about how the US and Mexico worked out this border issue. Plus—it is our home. I have actually gotten to watch the young musicians who play here grow up over the years, and become, well, pretty damned good at what they do.”

The owner then smiled at us, stood up and took his farewell. The writer and I got up to leave as well. I hope he decides to stay, as he seemed intelligent and sensitive. And he seems to know how to listen.

As I left the café, I checked my text messages. Someone had written to say that the kidnapped boy, horribly beaten, had been released, alive.

No one could say why.