I am working in the backyard. It hasn’t rained since September, apart from the two freezes which terrorized our plants by beating them with hail, sleet and freezing rain. Thinking about plants has become an act of hope.

The neighbors are playing on their side of the tattered fence, and Reina, the ten year old, comes up to me with a small milk carton that has a March of Dimes logo on it.  “Would you like to help babies that are born sick?,” she asks, sweetly.

I give her all of the quarters I can find. She thanks me and begins inserting them, one by one, in the slot.

It is Holy Week, and this year, doubly so, as Jews and Christians celebrate their high Holy days at the same time. Solemnity rules.

I am daily made solemn in my drive to the office, as I pass two large billboards, each placed within a mile of the other.

The first is an enormous crucified Christ, with two compelling statements, “Live for me; I died for you.” Compelling, as they appear to be the last statements of someone who is dying. Compelling, as well, for being a stark example of unconditional love. There are no profits to be made in the enterprise of giving your life for someone.

Each time I pass this image, I think, “I personally would have preferred an image of Jesus as the shepherd, or chatting with the woman at the well,” and, just as I am finishing up this thought, I come upon a second billboard, offering class three weapons for sale. 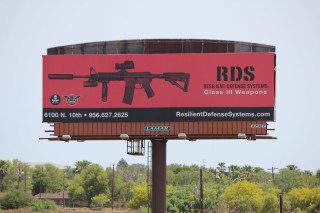 Two polar opposite messages, each within a minute of the other.

If only it were an ad in bad taste; if only the weapons were used as Gothic wall hangings in some millionaire’s ranch house.

Sadly, that is not the case.

In the past two weeks, authorities just across the border have found more than 150 bodies buried in mass graves. It seems that the victims were passenger bus travelers who were kidnapped by the drug cartel and told that they could be assassins, or be assassinated. While some were beaten to death, others died from “wounds caused by a high caliber rifle”-like the one being advertised on the highway. The connections between “us” and “them” are not hard to make. Selling weapons of destruction is not only legal in Texas, it is a good business.  (The Bureau of Alcohol, Firearms and Tobacco claims that 90% of the weapons used in cartel murders were purchased in the USA).

The Passing-Over of the People of God under Moses’ leadership was a bloody business, meant to end a previous bloody business. The passing-over of Jesus of Nazareth into the Resurrection, likewise.

We clearly have a ways to go; the religious festivities of the week are a way of reminding us of the work yet to be done. The passing over is not at all magical, just wonderful.

As I drive past Jesus on the cross, I decide to I need to fill my little neighbor’s March of Dimes’ coffers to the top–for sick children, for sure, but mostly for my own sanity.  It would be a good time to dip into a little bit of Holiness.